How we help you navigate the REG Yacht Code

In the last two decades, the introduction of various regulations has reshaped the yachting industry and improved safety standards.

Depending on how many guests are to be carried, owners must now ensure they adhere to ISM compliance, ISPS, LY3, MLC, the Passenger Yacht Code (PYC) and the REG Yacht Code.

What is the Passenger Yacht Code?

In 2017, the Passenger Yacht Code was replaced by the Red Ensign Group Yacht Code Part B regulations.

Prior to this, the PYC was a safety standard that applied to all private and commercial pleasure yachts of any size that wished to carry 13 to 36 passengers, without cargo.

The Passenger Yacht Code was developed to address the practical difficulties of applying international Convention standards to yachts and super yachts when they were originally designed for merchant ships, particularly the Safety of Life at Sea (SOLAS) Convention and the Load Line Convention.

The aim of the PYC was to minimise the risk to vessels, on-board personnel and the environment by introducing stringent design criteria, construction standards and other safety standards.

What is the Red Ensign Group (REG) Yacht Code?

In 2017, the Passenger Yacht Code was replaced by the Red Ensign Group (REG) Yacht Code Part B – a natural progression and improvement on the Large Yacht Code (LYC).

The LYC had previously tried to sets minimum standards for commercial yachts measuring over 24m, weighing less than 3000gt that were permitted to carry a maximum of 12 passengers.

The Red Ensign Group (REG) code Part A also superseded by the Large Yacht Code at the same time.

Why was the REG Yacht Code introduced?

Designing an aesthetically-pleasing luxury yacht that could carry 36 guests whilst adhering to all the requirements of the Passenger Yacht Code, proved to be far from easy.

In truth, this was due to the stringent SOLAS requirements which were intended for ships. Red Ensign Group developed the new Part A and Part B code so that technical, safety and operational standards could be maintained but were easier to accommodate within the design of a private vessel.

How are captains and owners affected?

Every experienced captain will have had to explain the 12-guest limit at some point, particularly on charters. This can often become a source of contention for all the parties involved.

While some guests understand the regulations better than others, it’s not unusual for people to plead for a slight ‘bending’ of the rules. Asking for small children to be discounted from the 12-guest limit is probably the most common, closely followed by requests for ‘few extra friends’ to sleep on the sofas.

To remain compliant with the Part A and B of the REG Yacht Code, it is essential that all of the rules are adhered to at ALL times.

Whilst there are several differences between Part A (12 guests maximum) and Part B (36 guests maximum), for larger vessels the measures primarily focus on steps that will help keep the additional guests safe.

Some of the safety measures that must be adopted include:

Whether you own a luxury yacht or Superyacht, we can provide all of the ISPS and ISM compliance a vessel needs.

Depending on your other yacht management requirements, we offer this as a standalone service or as part of our full management package.

To take the stress and hassle out of cruising, you’ll be provided with a Flag State approved Safety Management System (SMS) so you’re compliant at all times.

For further reassurance, you’ll also be assigned with a Dedicated Person Ashore (DPA) to conduct annual on-board compliance audits and act as a main port of call. If new safety or security legislation is issued, we’ll take care of it.

For a friendly and informal discussion about any of these issues, please get in touch – we’ll be happy to help. 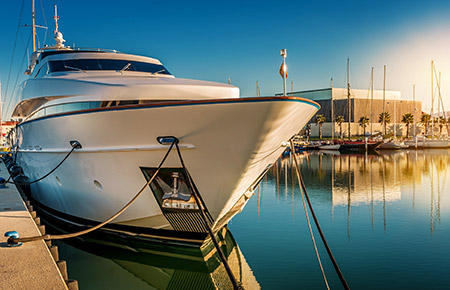 Allan and his team have a wealth of experience in the yacht management field and have always been efficient, diligent and honest in our dealings. I greatly value their support and service, and recommend them to any new yacht owner to help make the transition smooth and enjoyable.

I wish to say a personal thank you for the support you have given me and Vortex Marine over the last two years. Peter, my late husband was pleased he picked the right yacht management company, yours, to help with all matters.

It has been about a year since you have taken over the management of our client's 60 meter Feadship. We have previously had two other yacht management companies and even did the work ourselves for several months. I wanted to thank you for your excellent service and let you know how pleased we are in how seamlessly you have taken over and done just what we needed.